Serving as a Launching Customer for Startups.

The Startup in Residence Program allows the municipality to serve as a launching customer to startups by providing the opportunity to solve city-based problems.

What is/was the challenge?

City governments have little incentive to become early adopters of technology with high financial risks, preferring to wait until technology has been tried, tested and proven. In this light, municipal bodies are typically restricted by outdated, low-risk procurement channels in addressing the city’s issues, leaving innovative and eager entrepreneurs detached from municipality tenders.

In practice, a noticeable gap emerged between the aims of government and the tech-innovation sector, where the needs of modern cities were not in line with public policy and procurement, and where potential bridges were not being established. Simultaneously, many young innovators who were focused on the development of city-serving products and services, whilst addressing social challenges, lacked the technical and theoretical know-how to gain access to public procurement and cooperate with the government. How could the City of Amsterdam accommodate for the disregarded early stage companies, whose potential to improve life in Amsterdam is vast?

With this complex challenge in mind, the City of Amsterdam adopted the strategy of bringing together public and private sectors and began positioning itself as a facilitator of a flourishing tech ecosystem. Thus, with international inspiration drawn from the example of San Francisco, Startup Amsterdam (the city’s local economic public/private action programme), together with the Chief Technology Office (CTO) of Amsterdam, launched the Startup in Residence programme: a six-month in-house incubation programme for very early stage startups.

Since the programme’s foundation in 2015, Startup in Residence ran in 2016, 2017 and a third programme runs in 2018. The programme enables collaboration between the local government and startups in order to explore ways to use technology and make the government more accountable, effective and responsive to social and urban challenges, whilst ultimately enhancing the quality of life in Amsterdam. A unique feature of the project is the capability of the City of Amsterdam becoming a launching customer for the startup’s products or services, thereby kick-starting their career. 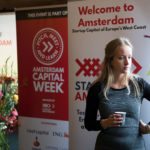 Amsterdam Capital Week
Menu
We use cookies to make sure you've got the best experience on our website. Read more in our terms and conditions.Got it!